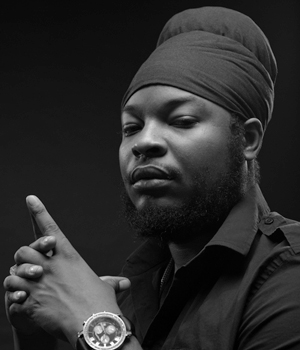 Blessed with a smooth, melodic voice and an impressive innate writing ability that can capture a story like no other, Pressure is poised to dominate the Reggae audiences of the world. Called Pressure by virtue of the hard times and daily struggle we all face, he is an artist who is dedicated to consistently delivering conscious messages to teach the people through his music.

Born Delyno Brown on August 5, 1981, Pressure was exposed to music at a young age due to his father being a member of a popular local band. He rose to popularity in the Virgin Islands and in regional and national reggae circles as a member of the Star Lion Family reggae group, a group of seven young artists. The group was in high demand and they opened for top acts such as Capleton, Buju Banton, Bunny Wailer and Junior Reid among others before splitting. He gained further experience as an opening act for Sizzla and Elephant Man. Pressure soon linked with the talented Dean Pond and Eno Stafford of Studio 340. Together they produced and released his debut album, The Pressure Is On, on the Tsuni Records label in 2005.

With hit tunes on the album such as “Zion Is Home,” “No Limitation,” and “Light In You,” it is no surprised that he garnered the attention of internationally renowned producer, Don Corleon. The synergy between the two, birthed the mega-hit “Love and Affection,” which was the first song they recorded together, which immediately took the airwaves by storm and has since earned a place in the pantheon of reggae classics. Following placement of the mega-single on the famed Reggae Gold compilation, the Love and Affection album was released in 2007 on Don Corleon Records.

In 2009 Pressure re-united with Dean Pond to release his third album, Coming Back for You. The album was well received in the US and European markets, and continued Pressure’s tradition of exceptional songwriting and outstanding musical production.

Currently, Pressure has two new albums that are both poised to spread across the earth like wildfire. After years of highly regarded collaboration songs, Pressure finally linked with St. Croix producer Tippy I of I Grade Records to create a full-length album of heavyweight roots and culture produced by the renowned production team, Zion I Kings. The album, entitled The Sound, was released on April 15, 2014. Also slated for 2014 is the long-awaited collaboration with Baby G of Yard Vybz Entertainment and Busspipe Records entitled, Africa Redemption – a massive album with guest features by Damian Marley, Tarrus Riley and Chronnixx. With these amazing albums on deck and a dedicated unit of musicians in the Zion I Kings band, the Pressure is most definitely on in 2014.