The Mad Professor and Prince Fatty are up to no good. Mixing experiments have led to the succesfull cloning of Earl 16 and Winston Francis ...The nuclear transfer formula having succesfully worked on Studio One legends empowered the dub master and his assistant to keep going. Little did they know that the Clone Theory didnt have the dynamic range to contain both a sound system MC and drummer in one duplication. Once the fusion chamber was turned on to full wattage Horseman started to mutate with devastating consequences...

Laboratory Grade Analog Dubs from the past and present cloned into the digital era for 2015...

Mad Professor and Prince Fatty met on the sound system circuit late one night in Bristol. Sharing the mutual love of all things analog, tape machines and 70s soul music a musical bond was spliced. Musicians such as Horseman and Black Steel who we both work with in the studio encour- aged us. Horseman was drumming for Mad Professor whilst still at school.

In 2014 Prince Fatty put on a show called Dub Attack where Prof dubbed his classic Massive Attack album live alongside some roots killers. Around that time on a late night visit to the legendary Ariwa recording studio Prince Fatty discovered that Mad Professor has over the years backed up his tapes and made safety copies of his Ariwa catalog aswell as infamous sessions with the likes of Yabby You, Uroy and more....The clone theory being born from the analog duplication process involved led to the album your about to hear.

A message from Prince Fatty " the clone theory album is a showcase of the dubs we will be playing. I want to take the performance and live dub mix concept to the next level by having our studio machines on the road with us. Lights low, no Mcs and no pull ups...Dub as it should heard and of course feel right."

The Mad Professor selects and duplicates 5 dubs from the vaults backed by the legendary Sly Dunbar, Robbie Shake- speare, Leroy Mafia, Sky Juice, Dean Fraser and many more. Featuring the vocal talents of Michael Prophet, Levi Roots and Earl 16 on vocals. This is the sound of the Ariwa studio where reggae, soul and world music collide into a genetic fusion of exploding dub. The blazing horns, deep melodica lines, rolling drums and heavy percussion take you back into the dub zone. Not to be cloned or shared. 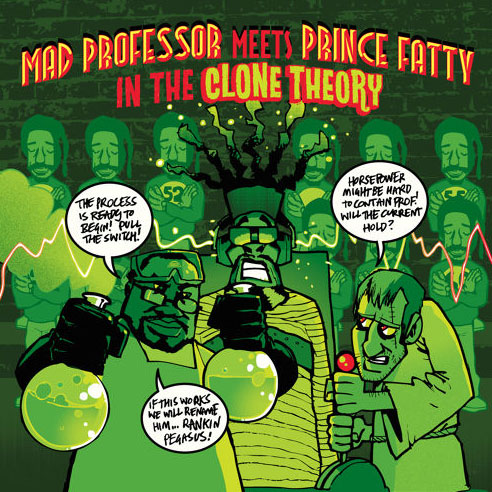