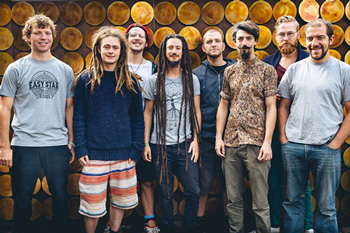 A band laden with groove, their up-tempo songcraft draws from numerous influences including funk, ska, pop and dub, transcending genre limitations to create an original, affecting sound. Over their two debut EPs, the band have honed an infectious, bass-led party style – while their studio sessions are driven by a highly dynamic approach to recording, spacious multi-tracking and arrangements, they are a different beast live. The ‘serious pop’ songs’ inherent strengths come to the fore and explode in a haze of onstage energy and pumping rhythm, demonstrating an uplifting vibe seemingly designed for festival fields.

Since forming in the charming Cornish idyll of St Austell, the 8-piece reggae outfit has been smashing up stages across the UK, with their incredible live performances having seen them play at 18 of the most prestigious British festivals. Their ability to fire up audiences of all musical genres has seen them share bills across the country with the likes of Cypress Hill, Arrested Development, Plan B, Tinie Tempah, The Streets and Dub Pistols.

Fresh from their 14 date UK tour alongside Easy Star All-Stars, the release of ‘Come Undone’ promises to whet the appetites of new fans whilst leaving long-standing supporters eager for more.

Backbeat Soundsystem build upon the conscious social commentary championed by the reggae tradition. Their new single ‘Come Undone’ addresses the mistake of inaction in the face of malevolent forces and emphasises our shared responsibility in building a better future. This philosophy of reflection and union is apparent throughout their debut album ‘Together Not Apart’ - to be released Oct 13th (UK) Oct 14th (USA) - which casts a critical eye on social inadequacy and presents the inclusive idea of community as a solution.