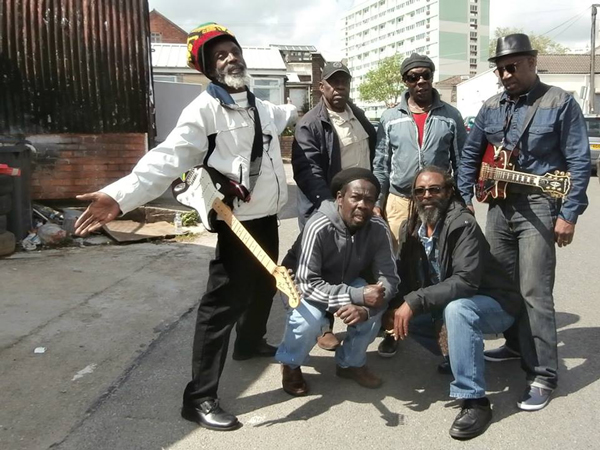 Black Roots are a roots reggae band from the St. Paul's area of Bristol, England that originally formed up in 1979.  It wasn’t long before their brand of roots reggae started to draw in people seeking to find a voice that spoke out against the injustices and alienation caused by the pace of political reform introduced in Thatcherite Britain.  Black Roots’ uncompromising lyrical content was that voice.  They gained national prominence when they released their debut 4 track 12” Bristol Rock in 1981 on their own label Nubian Records.  John Peel picked up on it gave it national airplay on his BBC Radio 1 show and hailed them as one of the best new reggae bands in Britain.  2 live radio sessions followed one in 1981 and the other in 1983.
From these beginnings, the band start to do shows up and down the country and broke into Europe circuit following a support slot in 1984 on UB40’s European tour.  Right up and until the early 90’s Black Roots work the live circuit extensively, playing clubs, colleges, venues and universities, and make regular appearances at Glastonbury, WOMAD, Elephant Fayre and other major festivals.  They also make several radio and television appearances.
They released several singles and albums well into the 1990's, Black Roots (1983 on Kick Records); The Frontline (1984) and In Session (1985) on BBC Records and Tapes and Allday Allnight (1986), Live Power (1989), Natural Reaction (1990) and With Friends (1993) on their own label Nubian Records.  They also released a series of 3 dub albums called Dub Factor featuring dub mixes of Black Roots’ rhythms by The Mad Professor and Dub Judah between 1991 and 1995.
And then everything goes quiet.  The band seems to slide off the ends of the earth and nothing happens until 2004.  But that loyal following of theirs continues to search out their music and it is this loyalty that leads to their re-emergence.
Makasound, a reggae label in France, contacts a member of the band and they agree to rerelease some of their back catalogue.  First comes a 14 track CD On the Frontline (2004) and this is followed by a reissue of In Session (2007).  Live shows in France follow and the band’s rebirth is almost complete.  It is cemented by Bristol Archive Records that started putting out more of their back catalogue, a compilation of their singles The Reggae Singles Anthology (2011) and a reissue of Allday Allnight (2011) with bonus tracks.  This collaboration culminated in September 2012 when Sugar Shack Records (a sister label) in collaboration with Nubian Records release the band's first studio album in over 20 years entitled On The Ground (September 2012) on vinyl and compact disc and follow this up with On The Ground In Dub (March 2013).
Although the band do not tour extensively any longer, this new interest has led to them playing a series of selected live shows both in the UK and the Continent that include Bristol Veg Fest (2011 and 2014), ATP I’ll Be Your Mirror curated by Portishead at Alexandra Palace in London, Sardinia Reggae Festival in Italy, WOW Festival in the Isle of Wight, Cabaret Sauvage in Paris France, Festival Ecolozicalizes in France, Glastonbury 2013, Lambeth Country Show in Brockwell Park London, Garance Reggae Festival 2014 Bagnols Sur Ceze France and many others.
Today’s line-up includes 6 of the original members of the band Errol Brown (vocals), Charles Bryan (vocals), Kondwani Ngozi (congas and vocals), Jabulani Ngozi (rhythm guitar), Cordell Francis (lead guitar) and Carlton Smith (vocals).  They are supported in the studio and on live shows by Colin McNeish (bass guitar), Anthony 'Drumtan' Ward (drums), David Henry Holder (keyboards), Winston Rose (Saxaphone), Henry ‘Matic Horns’ Tenyue (trombone) and Patrick Anthony Tenue (trumpet).
And, most importantly, the band has just finished recording its next album release ‘Ghetto Feel.’  It is produced by Jeff Spencer and Black Roots and mixed, edited and mastered by Louis Beckett.  Nubian Records, the bands label has licensed the album for release in Europe and the UK to Soulbeats Records, an independent record company based in Southern France.  ‘Ghetto Feel’ is out on 23rd September 2014 on compact disc (SBR065), vinyl (SBR066) and digital download.