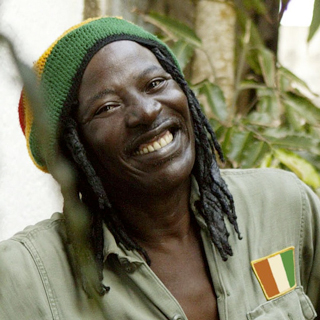 Alpha Blondy, the superstar reggae man from Ivory Coast, should need no introduction. He has been active on the scene since the eighties, a real grower of hits turned classics, from “Brigadier Sabary” to “Jérusalem”, not forgetting “Afriki” and “Apartheid Is Nazism”.

And yet, in spite of his status of Commander of the African Groove, Alpha reinvents himself album after album. He has always steered clear of the pitfalls of formatting and tried to bring in something new to the mix.

As was to be expected, his sixteenth studio album, Mystic Power, is no exception to the rule. “We’ve done a great job, my band Solar System and I. I wanted to innovate, amplify the whole rock aspect of our sound. You always hear “Roots Rock Reggae”, but in fact it’s more like “roots reggae”. I wanted to break free from the whole ethnic, tribal thing. I want to expand the reggae territory, reach out to all the fans. On this album, some of the songs are quite atmospheric, others are more guitar-based” Alpha explains, sipping on a cup of strong espresso. Indeed, on tracks such as “Seydou” and “J’ai Tué Le Commissaire”, the six-string takes the lion’s share, bellowing out riffs that feel very at home with the roots-infused mix courtesy of the great Dennis Bovell (Linton Kwesi Johnson, Fela, I-Roy, Madness).

It won’t come as a surprise that Beenie Man features as the guest of honour on album opener “Hope”. “Beenie Man and I have shared the stage in Suriname and French Guyana. I loved his show, plus he has a great sense of humour. I asked him to feature on my next album and he said No Problem. He phoned me up when he was in Germany, saying he really wanted to come over. We paid for his ticket and then recorded “Hope” together in Marcadet. There was a great atmosphere. I love Beenie because the music on which he toasts sounds a lot like reggae. Barking can become a bit tiring after a while”.

We all know how fond Alpha is of covering reggae or French chanson classics, and there are two prime examples on Mystic Power: “J’Ai Tué le Commissaire” and “Le Métèque”. The first is a cover of Bob Marley’s classic “I Shot The Sherif”, which Alpha had translated into French in the late seventies while at Max’s Kansas City in New York, just for the hell of it. Thirty years on, he has finalised this outstanding cover. “I transposed the lyrics but held on to the song’s atmosphere. It sounds more violent in French. I like the character’s mix of cynicism and gullibility. I wanted Bob’s black humour to stand out”.

The second is a cover of a monument of French chanson, which Joey Starr also previously took on: Georges Moustaki’s “Le Métèque”. “Making it reggae wasn’t hard. ‘I have the face of a Negro wog, a Wandering Jew, a Greek rasta’, that sounded just right. It’s a slow, indulgent jam, I love it. There is a treasure trove of gorgeous French songs that has yet to be tapped into. I want to give well-written songs a new lease of life by reggaefying them. It’s a juice definitely worth the squeeze”.

“Pardon” tackles Ivorian current affairs. On this acoustic number, the singer owns up to his own shortcomings: “I woke up with my vain back against the wall, I heard my conscience cry, I began to pray”. This song is Alpha’s Mea Culpa for failing to put an end to the violent outbreaks in Ivory Coast. “I hope they’ll understand I did everything I could. I tried, I really tried. But God decided otherwise. ‘They’ have wrecked Ivory Coast. They’ve shown their limitations as politicians. They talk about the love they have for the People, but I’m afraid I have to question that love. If they loved the Ivorian People, they would have made concessions to prevent what we ended up seeing. Sometimes, when you read the paper, you feel they got it entirely wrong. How many more gallons of blood do they need before they can figure it out?”

As for Alpha, he’s not one to miss an opportunity to remind us that his dear country’s old demons are still lying in wait with “Danger Ivoirité” (Ivorian-ness Danger), a reminder to us not to forget this African version of national preference. “I’ve always said so: this negro-nazi concept is dangerous. We started hearing about true Ivorians, those of ancient lineage, the difference between those born here and those who turned up here. And, as we are a very proud people, if you tell an Ivorian he is more Ivorian than his neighbour, you get a war. That’s why I wanted to denounce Ivorian-ness on this track”.

Difficult to top the title “Réconciliation” (Reconciliation) for one of the most surprising tracks on this most powerful album: what better peace symbol for a wounded country than a duet with the artist who, in the past, had been Alpha’s sworn enemy, Tiken Jah Fakoly? “United we’ll be strong”, Alpha says in the album credits. And he makes sure his actions match his words.

Malavoi close the album, wrapping it up concisely with their “Exil” (exile), a song Alpha discovered in 1988 and which has never left him since. Lee Jaffe, who played the harmonica on Bob Marley’s album Natty Dread, is just another legend featured on Mystic Power, an album heralding Alpha’s homecoming at the top of his game.
Alpha the melodist, activist and philosopher.
Quite simply the most important African reggae artist today.