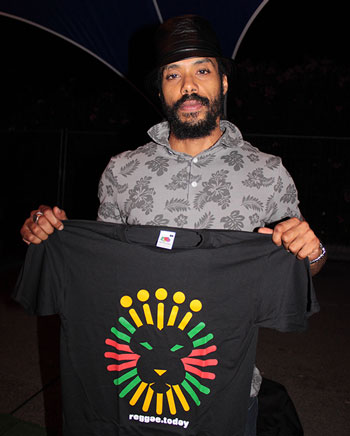 Lion D (David Andrew Ferri) was born in London of an Italian mother and a Nigerian father and was raised in Pesaro, Italy where he moved at a very early age with his mother. After getting familiar with reggae music when he is very young, he soon grows a deep passion for it and starts writing songs in jamaican patwa. As time goes on, his passion for reggae gets deeper and stronger, leading him to take part to several dancehall all over Italy with various sound systems in occasion of concerts of national and international artists, introducing his show in a peculiar 'conscious' style. As from 2007 he starts releasing his first singles ('Keep The Fyah Burnin'', 'Real Warrior', and 'You Know That I Love You') and in 2009 his first album titled 'The Burnin' Melody' is out under Bizzarri Records label. In 2011 a second album is released, titled 'Reap What You Sow', a collection of his best singles released for different european labels and of brand new songs recorded for Bizzarri Records. As a result of the success of his albums, his live performances grow in intensity, leading
him to perform all over Europe and in Usa too for two years, getting a very good feedback as far as audience and critics are concerned.
In 2013 'Bring Back The Vibes' is out, a further confrmation of his collaboration with Bizzarri Records. It is is a roots reggae album including the singles 'Nuh Ramp' featuting reggamaffin veteran Skarra Mucci and 'Try Afta You', an original revisiting of Inner Circle hit titled 'Sweat - A la la la la long', entering in the top ten reggae all over Europe. In summer 2013 Lion D opens the concerts of many reggae stars such as Lone Ranger, Israel Vibration and Snoop Dogg, too.
In 2014 he spends three months in Jamaica recording his new album with Alborosie and, when back, he opens all his concerts in Italy. In summer 2014 he also performs before Alpha Blondy at Gusto Dopa al Sole in Salento. Lion D style is a combination of several sounds having as common origin reggae: from dj
style to new roots, to modern dancehall. His songs written in excellent jamaican patwa.