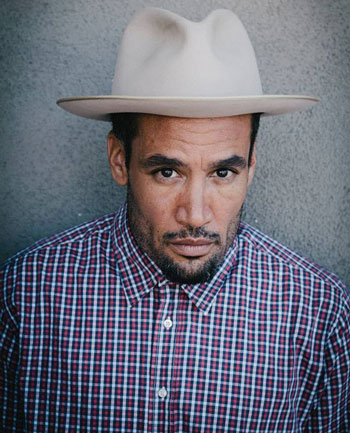 "It all goes back to that John Lee Hooker session," enthused Ben Harper. "Even John Lee mentioned it, saying: ‘yeah, yeah, you guys… that's good. Yeah, yeah. You should stay with that. Do that.'"

Mississippi born Musselwhite is one of the most revered blues musicians in the world. The harmonica master, also a respected singer and songwriter in his own right, has won countless awards during his legendary career including induction into the Blues Hall of Fame and collaborated with innumerable musical giants of the past 50 years including Howlin' Wolf, Muddy Waters, Big Joe Williams, Little Walter, Sonny Boy Williamson, Tom Waits, Eddie Vedder and the aforementioned Hooker, just to name to name a few.

A fan of the harmonica virtuoso since childhood, Harper begged an introduction to his idol at Australia's Bryon Bay Blues Festival in 1996. Despite the difference in age and background, the two hit it off immediately. The next pivotal moment came at a 1997 session for John Lee Hooker where they locked in musically, finding a common language that is seamless and remarkable.

Since then, the two musicians have worked together often, most notably on sessions for Musselwhite's 2004 Grammy-nominated album Sanctuary, where they recorded Harper's "Homeless Child," and on a limited edition bonus disc of the Harper CD, "Both Sides of the Gun" from 2006. The two have performed live together a dozen times, with each concert lightning in a bottle. The more they played, the louder Hooker's words echoed.

In the grand but all-too-rare tradition of full-album artist collaborations, Get Up! (Stax/Concord Music Group) featuring Ben Harper with Charlie Musselwhite is a modern blues classic. The release, Harper's 12th studio album, surveys gospel, roots, country and R&B; the marriage's fluid chemistry helping his multi-layered canvas expand as never before.

Harper, Musselwhite and the band (guitarist Jason Mozersky, bassist Jesse Ingalls, and drummer Jordan Richardson) play this intense and emotional song-cycle with economical grit. Produced by Harper with co-production credits going to engineer Sheldon Gomberg, the band members and Grammy winning roots music producer Chris Goldsmith, Get Up! has a timeless feel, as if it had been recorded 40 years ago in Chicago at Chess Studios just as easily as the Carriage House in Los Angeles.

Opening with "Don't Look Twice" Harper echoes Blind Lemon Jefferson, vocalizing in a high octave falsetto. The swaggering electric blues of "I'm In I'm Out and I'm Gone" comes next, the spirit of Muddy Waters no doubt smiling from beyond the grave.

"To me it's one of the crown jewels of the album," Harper says of "I'm In I'm Out And I'm Gone." "I am just going to go on record and say it. I think it contains one of the greatest harmonica solos in history. It's straight ahead but that's elusive. It's hard to do something straight ahead and make it sound fresh."

The fearsome "Blood Side Out" finds Harper portraying a man pushed past his breaking point. Both the blunt guitar solo and the emotive harmonica capture the frustration and manic energy of someone who's been on the short end of the stick too many times.

There's plenty of defiance on Get Up! and also tender heartache. Case in point the poignant acoustic guitar and harmonica duet of "You Found Another Lover (I Lost Another Friend.)" Featuring poetic lyrics, the song's three short verses detail a painful break-up, vividly embodied in Musselwhite's brilliant accompaniment. "I've played with John Lee, Solomon Burke and Taj Mahal, and one of my greatest musical moments is playing that song with Charlie," Harper says.

"I Don't Believe a Word You Say," is an angry blast of electric blues that could be directed at anyone who hasn't lived up to their promises, be it lover or politician. "I could fit those words to political imagery and it would almost work better than matters of the heart," Harper points out.

A rollicking New Orleans piano highlights "She Got Kick", an unambiguous testimonial to the ultimate control of the opposite sex. Things go further out on "We Can't End This Way," a heavenly synthesis of acoustic blues and gospel written in three-quarter time. In lesser hands it would have been a mess of good intentions but here the music is simply a celebration teeming with life.

Anchored by a pulsating groove, the band goes just as far in a different direction on "Get Up!" the title track. "That song was written around a killer baseline that Jessie had," Harper explains. "It's tempting to throw everything but the kitchen sink on top of it, but we left it sparse. Powerful. "

The haunting battle hymn, "I Ride at Dawn", dedicated to departed Navy SEAL Nicholas P. Spehar, the brother of a friend, is a harrowing look at a modern day warrior preparing for duty. "Real blues has depth and substance," Musselwhite points out. "It's not just tunes that are tossed off. These songs are all from the heart, more so than from the head. More than just music, they are reflections of life."

The album ends with the uplifting "All That Matters Now." The song is a reconciliation of sorts after the album's emotional journey. "I was in the production booth, in total producer mode trying to figure out where to go next," recalls Harper. "And I hear Charlie and Jason messing around in the studio with this deep groove. I heard it and told my engineer to roll tape. Don't go fix the mic, just roll tape. There's people talking and walking through the room, but it doesn't matter."

Recorded down and dirty, fast and live, Get Up! is an old school creation. This kind of musical chemistry demanded the approach. But its attitude, brash, assertive, disarming and vulnerable, is defiantly modern. This is a record Harper has always aspired to make but knew required the essential life experience. Get Up! proves it's been time well spent.