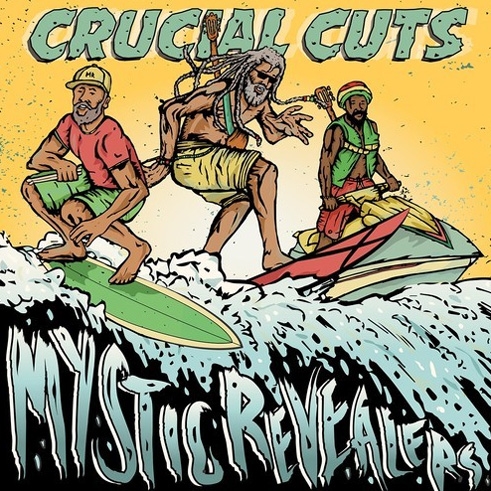 Crucial Cuts gathers key tracks from the band’s catalog, including “Young Revolutionaries”; “Rasta Man”; “I’m Gonna Tell Ya” featuring Anthony B; and the Sizzla collaboration “Tell Them.” In a nod to their other passions, the cover depicts founding members Wilmot, Edwards and Henry on surfboards and jetskis.

Three decades after their earliest single releases, the band’s message remains exactly the same as it did when Wilmot, Edwards, Henry and Davis first came together near the shores of Bull Bay.

This originally ran in Reggae Report in 1995.

MYSTIC REVEALERS
Righteousness in the Midwest

During the Mystic Revealers' recent U.S. tour, a few off days were spent in St. Louis, Missouri, where this most promising of reggae bands brought their righteousness to America's heartland.

In an interview with leader Anthony Wilmot, better known as Billy Mystic, discussion ranged from his band and family to his deep Rastafarian beliefs. As many fans are unfamiliar with this band's history, we started with that topic.

"We formed in de late '70s," stated Mystic in his captivating and inflecting patois. "Me an Lion an Patch an Benny an Jahward an Bobby, together as kids in school, ya know. Jamming and calling ourselves de 'Revealers.' I played de flute - I didn't start playing guitar til I was 21 - and den we came up wit 'Mystic' to describe de Revealers. In Jamaica, if you're a leader of a band dey identify you wit dat band, y'understand? Like Tabby's de lead singer of de Diamonds, so dey call him Tabby Diamond. Billy is de leader of Mystic Revealers, so dey call I 'Billy Mystic.'"

This extremely articulate, intelligent and, without a doubt, "mystical" Jamaican then proceeded to talk about his family and musical influences.

"I mon born the 25th of February," confided Mystic. "I have two brothers, Freddie and Greg, both older dan myself. I'm de wash belly. My parents were journalists and growing up in Bull Bay - eight miles out a de heart of Kingston - I was filled wit reggae. But being so close to America brought us exposure to foreign music; Aret'a Franklin, Stevie Wonder, all dem t'ings. But I personally loved music from Dennis Brown, Israel Vibration, Diamonds, Freddie McGregor, Hugh Mundell, Barrington Levy, Sugar Minott, Gregory Isaacs, Linvall Thompson, ya know, dem kind of music. Dey were de pop music of de time."

When questioned about Bob Marley, he continued.

"Yeah, respect goes out to Bob, he got de benefit of Island Records' publicity and was de first one out of de T'ird World. But in de late '70s he wasn't very popular mon, him go a foreign, moved outta Jamaica, sort of like us right now. Ya see, it's because our music has taken an international turn. We are not defined strictly by de Jamaican music environment. We're making our own sounds, not in de confines of de accepted musical constraints dat Jamaica music is under now. We're not afraid to make melodic changes and experiment."

Mystic was obviously referring to his band's latest release, the exceptional 'Space and Time,' but he also touched upon his first two discs, 'Young Revolutionaries' and 'Jah Works.'

"'Young Revolutionaries,' de songs, ya know, dey always be good songs, but de album was not supposed to be released. It was a demo, we didn't really have de time or funds to make it meet our standards, but we plan to re-record dem songs, definitely in de future, yah mon. Modernize dem.

"Ya see, Mystic Revealers consists of many parts: de band of course, and Mystic Reggae Sound which is our publishing company, and Carry On Productions and RAS records, which is our distribution company. Dat is our entity. So we work wit t'ese people and based upon de success of de last album ['Jah Works'] and de videos dat we did, we got more time in de studio to work on de t'ird album, y'understand? We could book de studio for a week, not t'ree days and four hours a day, but for a week. We just set up de whole band in de studio, set up everyt'ing. And when we caught a nice groove we'd run de tape.

"All de tracks, except 'I and I,' were done live in de studio. Den we went back and if we wanted to fix a likkle part somewhere, we did. So we're really happy with dis one because it's de Mystic Revealers live, not just some computer sequenced tracks like t'ose which dominated de last album.

"Wit 'Space and Time,' we've all become better musicians. When we started we were really just learning to play de instruments. Wit dis new one, we have more experience and it reflects itself in de caliber of de performance."

Mystic's songs continue to be infectious and well written and he discussed his songwriting and concise lyrical talent.

"When I write I want my songs to be songs dat you can just play guitar and sing dem, to be of dat quality, y'understand? Play any of my songs just like a folk song, with an acoustic guitar. Songs wit a message, get right to de point and just say exactly what you mean.

"Being around people eloquent in der speech - my parents and others - always selecting de proper word, so you get a wider vocabulary because you hear dem using more words, because dem are journalists and on der desk is a Thesaurus and a Dictionary.

"I also went to Agriculture College for t'ree years. People at dat college end up running de big industries in Jamaica. De people had a certain intellectual level and all dese t'ings helped shape me songwriting skills, ya know?"

We went on and discussed the seriousness of his lyrics and the message that he's trying to spread.

"Read de lyrics to all dem albums," said Mystic, "and come to your own conclusions of what our message is. It's not good for me to tell you what it is, but I am confident de songs will speak for demselves, y'understand? And I'm sure dey will lead you not in de path of destruction, but in de path of righteousness, because dat is what de music is trying to show."

"Don't sit and idle, pick up your Bible,
read one chapter every day.
From cover to cover
and you'll discover
how to live and how to pray"
- 'Rasta Man'

Even though Mystic is the leader of one of reggae's most critically-acclaimed bands, he truly remains humble.

"Ya know, I don't put myself on no pedestal, I realize I'm just a mortal likkle mon, me no try to make myself greater dan I am, me just glorify God who me know is de greatest. The nation of de world should pay homage to HIM and bow down and accept HIM, de King of Kings, de Lord of Lords, de conquering lion of de Tribe of Judah, Direct descendant of King David, seated on de t'rone of King Solomon, y'understand? Me just a simple likkle mon who realize dese t'ings from de Bible.

"I am just one of many Rastaman. It just so happens dat I am de one who gets de vibes due to my background; educationally, socially, spiritually, even genetically. And it encourages me to really express myself and to take it upon myself and to go out on de road and go t'ru Babylon and face all t'ings."

When the Revealers do go on the road, they're one of the most powerful reggae bands to ever take the stage with Mystic's athletic movement, charismatic presence and impassioned delivery the focal point.

"Yeah, I'm de focal point of de t'ing, in certain ways," agreed Mystic. "No one wants to see some guy scared on stage. Dey want to see someone who believe in what dem say, who can stand up and defend it. Dat why a woman love you when you defend somet'ing and a man admire you cos you strong, y'understand?

At this point, the phone rang, and after Mystic answered with the word "fire," he talked lovingly to his wife and daughter calling from Jamaica.

"I have four children mon, and me t'ink one is on de way, but me wife not certain. Me have t'ree boys and the youngest one is a daughter. The oldest is 12 years old."

If fatherhood and international touring isn't enough, this talented artist, whose hobbies include surfing and spear fishing, is also a fixture on Jamaica's #1 TV show, 'Royal Palm Estates.'

"I play CC, an illegitimate child of a big plantation owner. My mother is a housekeeper and I don't realize dat mon is my father. I'm not really an actor, it just so happens dat dis part corresponds wit me natural personality, so I can more or less be myself. I play a Rastaman, a musician. The only difference is CC is not really as devout a Rastaman as Billy Mystic is. He's more influenced by society and his desire to become a reggae star."

As our conversation wound down, I mentioned how I hoped the masses would soon realize the greatness of the Revealers and that a slot on a future HORDE tour (similar to Ziggy Marley this past year) could possibly be the break needed to give this crucial band the recognition it deserves.

"If dat is de will of Jah, it will happen," contemplated Mystic. "It's all up to Jah. Maybe we are just paving de way for de person who is coming to do it. Y'understand?

"As long as I am doing what I do and I believe in what I do, dat is a joy to me. To be able to love music, write music and de music dat I write tek me around de world and meet people and speak t'ings dat I can listen to afterwards and feel proud dat dat is the stand dat I took and dat is what I belived in and dat is what I defended."

"Your life is there before you, your time is moving on.
In just a little while it's gonna seem your life is gone.
So take your chance and make it into something that will grow,
don't let the evening find you with nothing there to show...for your time."
- 'Space and Time'

Mystic is a modern day prophet, sincerly spreading his message of hope and inspiration throughout the world. If you take your music seriously, check out his band's records, and by all means, if you have the chance to see the Mystic Revealers perform live, jump at the opportunity.

As the I-Threes sang years ago in their tribute to Bob Marley, "Many Are Called, Few Are Chosen." Billy Mystic, without a doubt, has proven that he too belongs in that latter category.