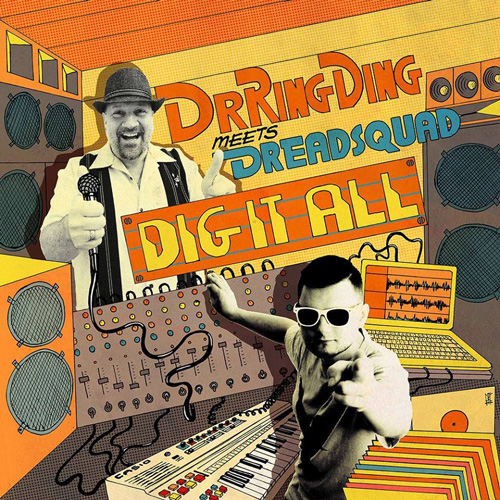 Dig It All - calling all digital immigrants and natives!

Dreadsquad says: After a number of previous collaborations in various styles of the Reggae genre (such as Roots, Dancehall, Ska and Dub) and uncounted hours of sharing the passion for this music by talking about it, listening to it and performing it, we decided to join forces for a venturesome project.

It is no secret that both of us have a predilection for the origins of the computerized Dancehall style that was created and developed in 80s Jamaica by innovative producers such as King Jammy and Bobby Digital. The instrumental-track to Wayne Smith's "Under Me Sleng Teng", a Jammy production from 1985, is claimed to be the first 'all digital' rhythm in Reggae. It has paved the way for literally thousands of artists and producers, including ourselves.

On the performance side, the inspiration lies in the works of veteran Deejays such as Admiral Bailey, Chaka Demus and Cutty Ranks, to name a few. Storytelling as a way of entertainment, finding diverting topics, interesting expressions and riding the riddim with a peculiar flow.

On the producer side, the inspiration came from the pioneers of digital Reggae such as Jammys, Harry J, Steely and Clevie, and Gussie Clarke. During the production, a lot of classic original gear from back in the day was used - Yamaha CS-01, Casio Mt41 and MT100, Roland Space Echo, Fisher SpaceXpander, and the Coron DS-08 Drum Synth.

This way, it was possible to catch the sound and the spirit of the originators and respectfully and sensitively transport it into modern times.

So here it is - our tribute to the veterans and pioneers of the digital style, dedicated to all digital specialists!

The Dreadsquad project has put Poland on the map for creating dancefloor friendly riddim and bassline madness. From the Superfly Studio in Lodz comes tune after tune combining Jamaican sounds of of Reggae, Dub, Dancehall, Ska and Rocksteady with the modern sounds of Breakbeat, Jungle, Dubstep and Garage.

Dreadsquad was launched during 2001 and what followed was a flurry of mashups, remixes and Polish Sound Clash victories which gave confidence to turn a passion into a way of life for the man at the controls, Marek Bogdanski. Hundreds of gigs in Poland turned into European tours and now Dreadsquad has toured as far as the USA, Canada, Brazil & India.

So far Dreadsquad has released 4 mixtapes, 4 full-length producer albums and a host of vinyl and digital singles which made it into the top of the best DJ shops in Europe and into the playlists of the premier DJs of the world.

The Dreadsquad sound is a worldwide sound taking influence and inspiration from all walks of life. It is glued together by Jamaican Soundsystem culture and modern Bass music culture and is a force to be reckoned with.